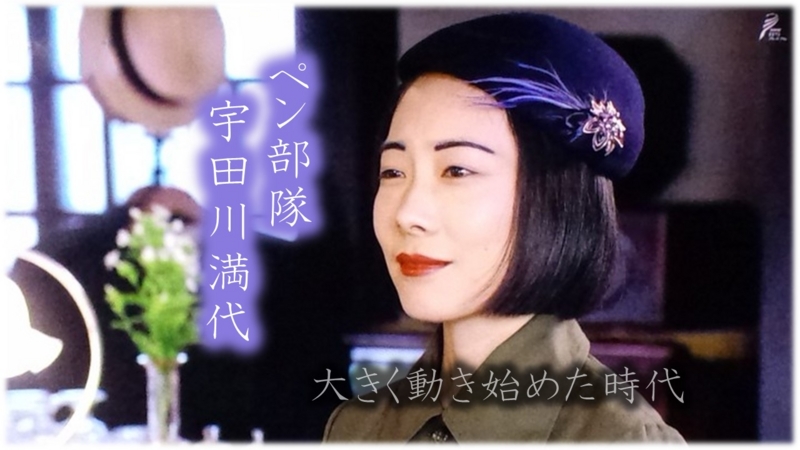 "What you read was different with the one we have had checked each othere."

"I wouldn't liek to get involved in this case if it were in trouble. Well, Gokigenyo, Sayonara."

"Mrs. Muraoka, I have something to talk with you." (Kurosawa)

Kirosawa intrrogates why she changed the draft during the broadcast."
Hanako lowers her head.

"Even though it's the news for children, you masn't pervert the truth. That's the broadcast."

And kurosawa tell her that the control by the authorities becomes more strict.

"You have modified the draft that the authorities have had reviewed..."

Urushibara shoots his anger to Hanako.
Urushisbara thinks of only his position.

"You women would always..."

Misato is thinking of Teru-go as Teru mistakenly.

Hanako tells Eiji that she changed the draft.

"I want to save the dream of children no matter where the world goes into."

There is a call from Miss Udagawa...

"I have something to inform you. Please come to the Cafe of Kayo."

Ummm, only Miss Udagawa coiuld, so assertive.
Then Ayako come by.
Hanago goes out with Ayako.

Hana, with the progress being made on these aircraft, will they usher in a time of peace? Hm? Or lead us further into war and misery?

How will humankind use these air planes, huh? For peace or for destruction?

"I have decided to go to a battlefield in the continent as The Pen Unit.

Miss Udagawa is going to combat field as a war correspond.

Next week, 23th week, you will find "Meeting with Anne."